I finally got my new site up and going! Took a while but I'm happy with the site. I also have a Facebook profile ' Marcus Sandell - Homepage'. I'd be more than happy to be your friend, just ask me, and from there it might be easier to follow my posts. I'm going to publish all of them as a link there also. 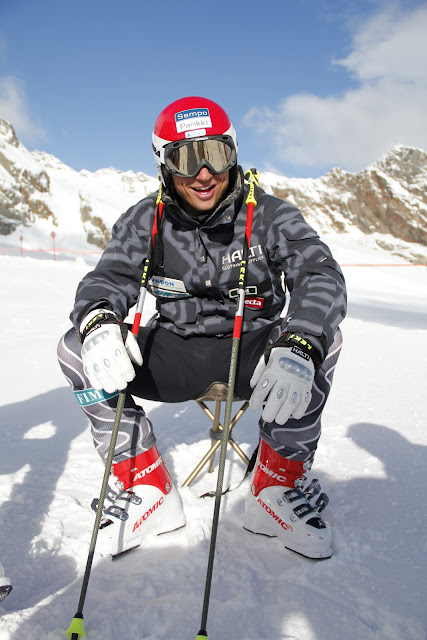 Since last time I wrote I've been on two camps. We were in Hintertux for a week, training GS and SL. The slope was really icy even though the weather wasn't so good. I found a good ice-setup fot my GS skis and it feels good. The slalom was really Rock'n'roll and it was good training for me considering my number is quite high.

Next camp we started in Pitztal. It felt a little strange to go back there and up to the glacier. But when I realized that there was almost one meter snow more than last year and that there was a piste going over the rock section that I crashed into I got more comfortable. But the surface was soft and we couldn't ski so we moved after two days to Sölden for some good training on the Icebox.

At home last week we had our press conference and some photoshoots. It was a busy and short week at home for me. Yesterday we went with Kalle to Sölden, we were supposed to ski on the race slope but the chiefs at Sölden decided that no one get's to train there. So we trained with the Yanks Ted and Bode on the Icebox. In the afternoon we moved to Hintertux, here we'll probably stay until next week!

Hope all of you have had fun and been well!
Marcus