After our slalom training in the morning, where I skied out 6 times on 5 runs (Had a little problem with straddling today!) we drove to Jesenice and played Ice hockey in the home teams arena! It was a lot of fun but I think my dreams of becoming a NHL star are over. I scored once, two posts, gave one tackle and took one tackle by Andy's service guy Mitja so I spread on the ice. :) I was all the time one step behind but I really enjoyed it!

Our youngster Santeri almost got a contract from the team. He scored after 20 seconds, and many times after that. He might play already tomorrow against Ljubljana! ;)


Oh yeah, since it's New Year we stopped to buy some fireworks! I think there might be a show tonight here in Kranjska Gora! 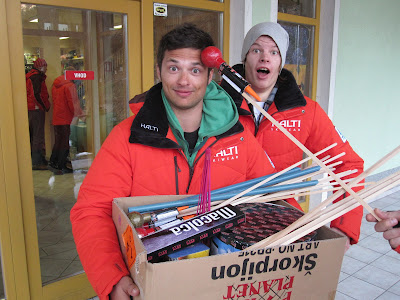 Happy New Year Everyone! See you in 2011!
Marcus