14th place and the WC season over. 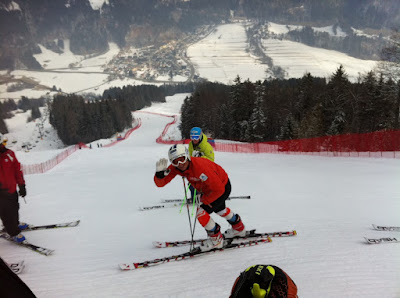 Damn, that ended too fast. Just when I was getting started! Now it's a long wait for me until the next real GS race in Sölden. But that's okay, the season was after all pretty long and my body needs some rest.

Positive today was that I really wen't for it. Didn't think so much about the finals, my goal was top 3. So on the first run I skied a little too straight on the top part, but in the end pretty okay. I was behind Schörgi    too much, but not behind the podium. I knew that if I give it all in the second and succeed I would have a chance. Like Alexis Pinturault, great skiing from him today! I started well on the second and then suddenly I was a little too back coming in to a turn and my outside ski went straight and inside ski caught grip. Almost a full stop and then skiing and trying 150% to the finish. Maybe trying too much in the end, but still 14th with that mistake was okay. Could've been worse.

Negative was that I missed the top 25 and WC finals with 4 points! I would really have liked to finish the season at Lenzerheide. But in the end I'm happy that I found my speed after all the struggles, anyway I already messed up the cup standings when I didn't get any points on the 5 first races. I'm going to concentrate on getting ready for the next season, it's going to be interesting!

I decided that because I don't really feel a 100% I'm not going to race the slalom tomorrow. Instead let our youngster Santeri race and try to get better for the EC slalom on Monday.

Have fun and thanks for the support!
Mare